After being at AOK Venues for a year, it was finally time for me to be let loose and experience my first overseas networking event! I was lucky enough to be invited to the Meeting-Place event, organised by Visit Berlin Convention Bureau, which took place over 5 days in the beautiful and historic city of Berlin.

Over 150 people attended from all over the world including Singapore, Australia and Rio so I couldn’t complain about my short-haul flight of 1 hour 15 minutes! After departing London Heathrow at 8:50 am, we landed at Tegal Airport to be greeted by the Visit Berlin Convention Bureau who ensured we were transferred to our hotels in comfort.

Everyone was split across 12 hotels which allowed all of us to experience different hospitality over some of Berlin’s most recognised properties. Tegal is one of two airports in Berlin and is ideally located only 5 miles from the city centre making transfers quick and easy for large groups. I was lucky enough to be staying at the Grand Hyatt Berlin in the Potsdamer Platz region which is a high rise area, popular for shopping, restaurants and home to companies such as Sony.

The Grand Hyatt has 342 bedrooms, 9 meeting rooms with lots of natural daylight and a roof top pool and spa area. My bedroom was incredibly spacious with a large walk in marble bathroom equipped with a TV, wet room shower and a bath. There are also two restaurants on site and their newest addition, the ‘Jamboree’ Bar which is perfect for evening drinks or small groups.

After having a few hours spare time to freshen up and explore, we were picked up and transported to ‘Classic Remise’ for the opening evening. Classic Remise is home to hundreds of vintage and extremely expensive cars! If you have a love for sports cars, old classics and unique models then this is the place for you. This is a very popular space for events, able to hold up to 600 people for parties, dinners, drinks receptions, or smaller intimate meetings. It really is an incredible venue and very unique to be able to walk around and view cars that are worth millions – sadly I was not allowed to take any for a test drive!

Friday morning we were up bright and early and off for a day of fun activities. We first headed to a riverside beach club called Yaam (Young African Artists market) which has volleyball courts, bars, street foods and DJ’s. Imagine shacks, graffiti and reggae music!

First up was a graffiti masterclass run by a company called ‘Urban Artists’ who specialise in running street art workshops. Once we had been kitted up in our protective gear we were let loose with the spray cans and were able to create our own graffiti wall. This is a great activity to do as a team for groups of up to 30-40 people, especially for corporate companies who want a more creative way of brainstorming or expressing themselves!

Next up was the ‘The Trabi Safari’. This is the best way to see the city and the most fun! Up to 4 people can fit into one car (at a squeeze!) and you can have up to 10 cars in a convoy at one time. Tours last from anything up to 1 – 2 hours and you can choose the various routes you take depending on what bits of Berlin you want to explore. The convoy is led by a guide in a car at the front who will give you an explanation of the sights you see in your chosen language over a radio. And yes you get to drive the Trabi’s yourself! I personally decided against this after seeing the gear stick is on the steering wheel! It really is an incredible way to see the city and so much fun. 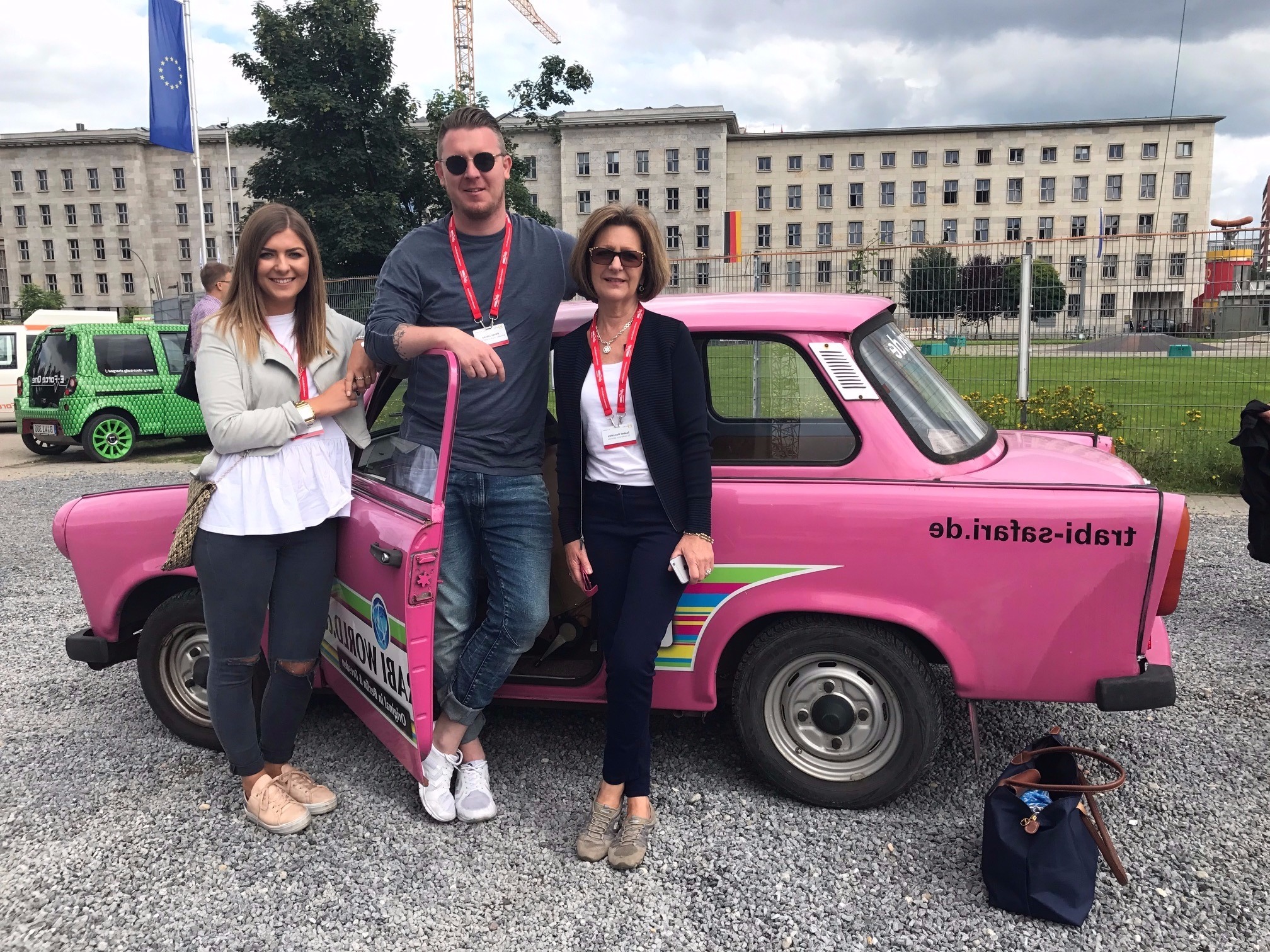 The afternoon was finished with a lovely 3-course lunch a boat down the river allowing us to see all the sights of Berlin. That evening we were hosted at a venue called Café Moskau which is a 1960’s era conference centre with space for up to 2400 people over three floors. In the evening, the basement has become a renowned and popular night club for locals and tourists. The venue is very flexible and offers a great blank canvas for events allowing you to be as creative as you wish.

Saturday was a day of back-to-back meetings with suppliers and venues from all over Berlin and I got to learn about lots of different spaces that the city has to offer. My favourite venues that I learnt about were the ‘Tempodrom’ and ‘TV Tower’ – both very different but incredibly unique to Berlin and offer a ‘wow’ factor for events.

The meetings were held at an amazing venue called ‘Bolle ‘Festsale which is an industrial charm of the 1920’s. The venue has ample meeting spaces with high ceilings, the start of the art technology but also offers lots of character and history. It has also recently opened a new roof terrace offering views over Berlin. I was really impressed with this venue and for larger numbers, it would be a breath-taking space for conferences and gala dinners.

In the evening we were hosted by various hotels as part of a ‘dine-around safari’. I started with an aperitif at Hotel Du Rome, followed by a starter at Radisson Blu, main course at the Midtown Grill at The Marriott (if you love steak I highly recommend this!) and then finally dessert and cocktails at the Grand Hyatt. A great way to experience the various hotel's food but also my idea of heaven!

Sunday morning we had the choice of various site visits to attend of different venues. I chose New Hotels which included properties such as Riu Berlin, Titanic Hotels and Amano Hotels. These have all recently opened and are great additions to the city, offering flexible and modern event space. After we were hosted at Hilton Berlin for a superb lunch including a chocolate fountain – my favourite part! Sunday night saw our trip come to an end with a beach party at ‘Beach Mitte’ – a fake beach in the middle of Berlin. The space consists of volleyball courts, a hire wire course, an indoor event space and a beach bar. It has a really relaxed atmosphere but would work well for large groups for team building or companies who want a slightly more creative meeting space. I spent the last evening sat on a deck chair, in front of a fire pit with a cocktail in my hand – perfect way to end an amazing few days! 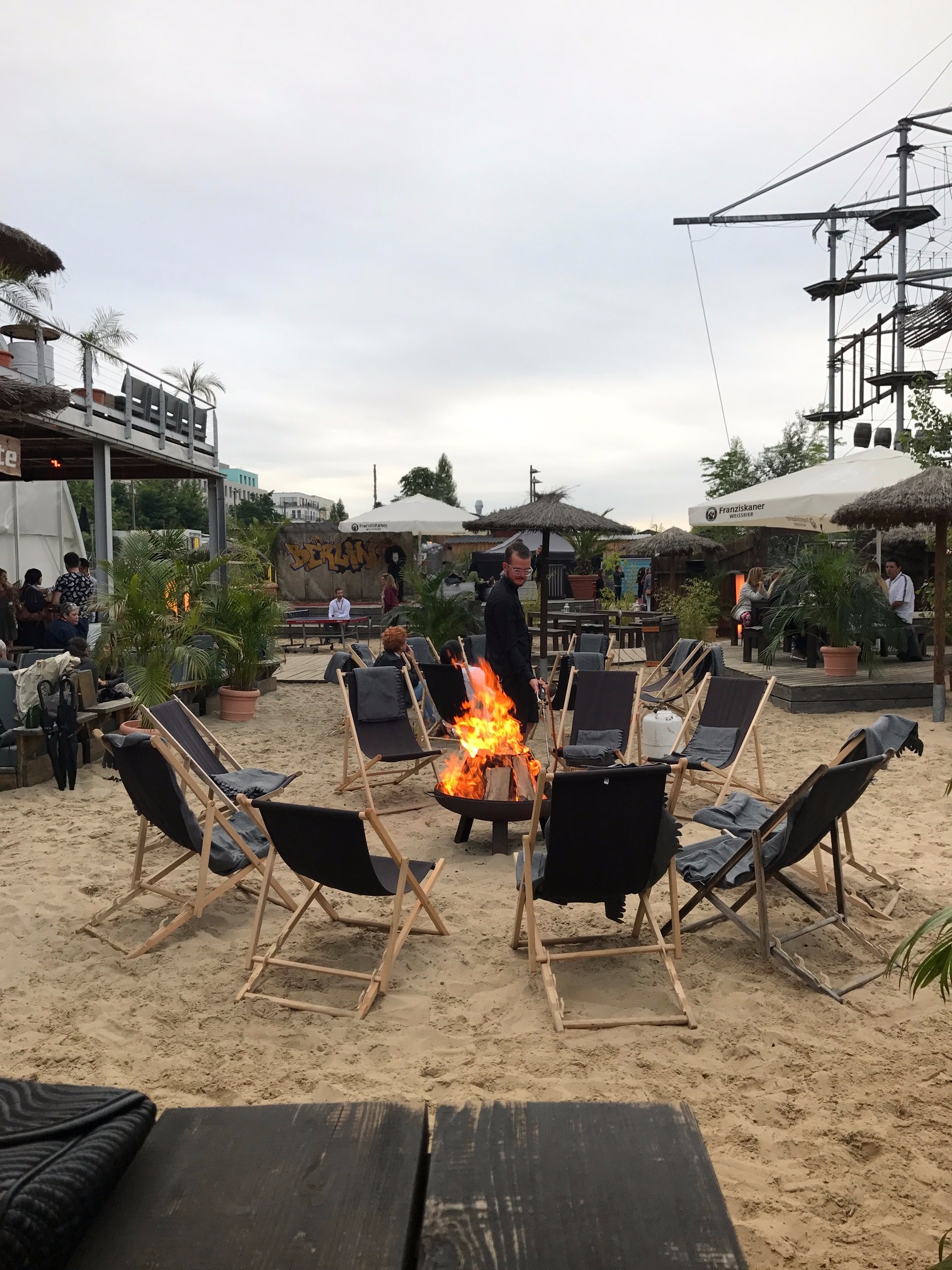 Thanks to everyone involved for organising such a fabulous trip!

Find out more about how AOK Creative can help with your incentive travel here.